Today is the final day of the 2012 rugby 6 nations, and there will be three games on TV today. First off is Italy vs. Scotland at the Stadio Olimpico in Rome. Here Scotland will be desperately trying to avoid getting the wooden spoon. Both teams have racked up 4 losses in this years competition. After Scotland’s failure last week, and Italy’s ever increasing form, the game will come down to the wire. Kickoff is at 12:30pm GMT, or 1:30pm local time. BBC starts coverage at 12:10pm on BBC1. RTÉ will also cover the game, with their programming starting at 12:00pm on RTE2.

The main focus of the competition today will take place at Millennium Stadium, in Cardiff, where Wales will face France. Wales has already blown everyone away from the competition, but the prestigious Gram Slam stands between them and 80 minutes of rugby. Again we predict it will be a close game, which kicks off at 2:45pm GMT, where Wales will have to pull another big performance out of the bag to win at home, and the French will be doing their best to stop Welsch bragging rights. 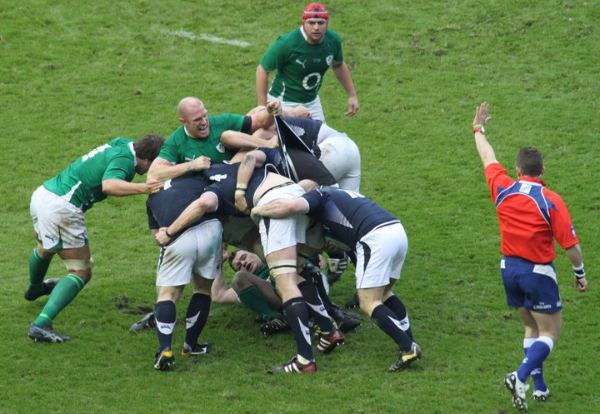 Our focus wil be on the England vs. Ireland at Twickenham, in London. Kickoff of the final 6 nations game is at 5pm GMT. And it’s possible that the 2nd and 3rd place will be decided here. With a lot to prove both teams will be gunning for it from the off. Some of the team choices by Delcan Kidney have been questioned, but we’re willing to give him the benefit of the doubt. Let’s see how the Irish players do ! Looking at the stats for the competition you see that has the healthiest points difference, and hopefully they will continue putting the tries away.

We’d like to wish all our readers a Happy St. Patrick’s day, where ever in the world you are watching the game today