With a population of 4.5 million people in Ireland alone, and an estimated 3 million Irish passport holders living elsewhere in the world it’s no wonder why RTE have started to focus more on online content in the recent years. However, it’s worth mentioning that RTE use geo-block their content so if you’re not visiting their site using an Irish IP address you won’t have access to it – unless you use something like a VPN of course!

With the likes of BBC and Channel 4 offering quite a good range of content on their streaming service it’s fair to say that RTE have a lot to live up to, but let’s take a look to see whether they’ve done a good job with it. 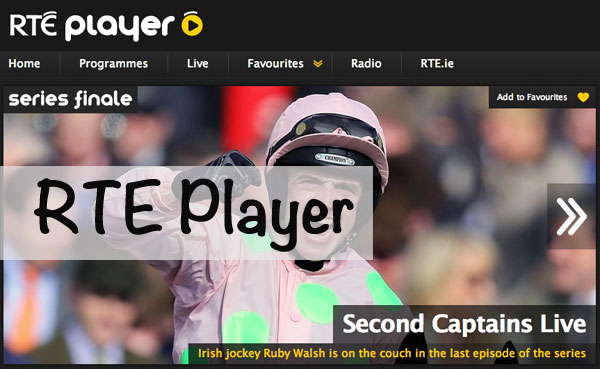 Let’s face it, there comes a time when you really want to watch something but someone else in your house already called dibs on the television. One of the first things that you’ll probably notice when watching programmes via your computer is that the quality isn’t necessarily the best.

The quality is 1024k (with the option of going down to 512k if you wish) which is fine if you have a small enough monitor. However, if your monitor is larger than normal then you will unfortunately notice the huge quality difference between what you’re watching on your computer and between the television. You could of course just minimise the screen, but where is the fun in that ? 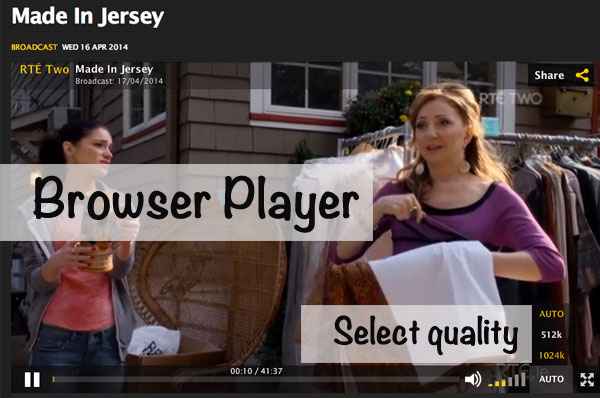 The layout of the site itself is pretty good in our opinion since it’s quite easy to navigate to what you’re looking for. It’s also a nice touch to be able to see the most popular shows on the right hand side of the site if you’re ever stuck for ideas.
Another handy little feature is being able to watch live television as well as catch up on programmes. The only downside to this is that there are a decent bit of programmes which aren’t available to watch live, but the usual programmes that RTE make like RTE news and even programmes like Home and Away are all available. We never thought we’d say this, but it can actually be a bit frustrating when live television goes to the ad break and you don’t get to watch the ads – just a black screen!

Overall though accessing RTE player from your browser is a good experience, especially if you forgot to watch your favourite programme the other day.

RTE Player came out on iOS first but now is on Android devices too (with 100,000+ downloads already). As expected, navigating your way around to the programme that you want on a small device such as an iPod Touch is a little bit difficult because of the size of the screen, but we can’t complain too much about that. 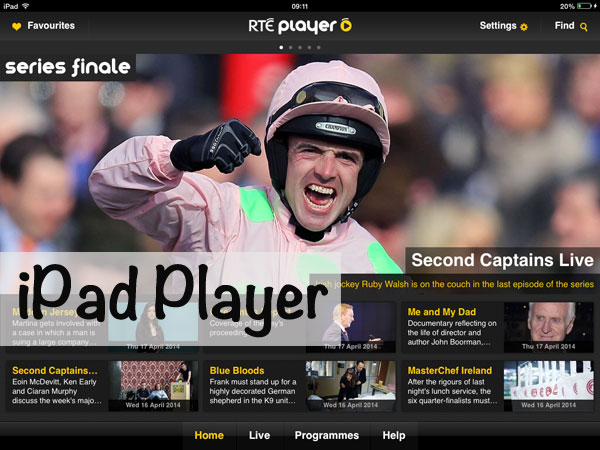 If you have an iPad or phone that has 3G capabilities you’ll be glad to hear that you’ll be able to use the app using 3G so you don’t have to depend on WiFi all of the time. This means that you can watch shows while you’re out and about on the train and so on, but it’s still a real pity that RTE won’t let us download a show while we’re at home and let us watch it whenever we want. That way you wouldn’t have to worry about going over your download limit from your network for example.

Viewing live streams is still possible even on iOS and Android devices although it’s worth pointing out that the selection isn’t as great as the browser version. Unfortunately this is due to licensing restrictions and once again RTE don’t want to show any advertisements during the add breaks which is quite strange.

The best bit about the RTE Player apps is that if you own an Apple TV2 (or newer) you can use Airplay, which lets you stream straight to your television for example. Airplay uses your Wifi Network and is seamless to use. We do have to say, RTE done a great job with this since it doesn’t require mirroring like lots of similar apps do, but they didn’t bother with multitasking which is a huge let down in our books. This can be a huge pain if you end up getting a call or text while you’re using Airplay since if you exit the app it’ll suddenly stop streaming straight away.

At the moment RTE Player on Android devices won’t stream to your television but in the near future we’re hoping that this will be possible with Chromecast which is reasonably new to the market.

RTE has done an incredible job with this streaming service, but you do get the feeling that they kind of forgot about the basics while developing it. Basic details like the video quality and amount of live TV coverage just isn’t up to scratch and it can be quite annoying considering they must have spent lots of time on the user interface, Airplay support and making it available on several different platforms.

We’d nearly prefer for them not to have iOS or Android versions and just have a top notch browser version to be honest. However, if you’re stuck abroad and want to watch some programmes that are only available to RTE then you can’t really complain too much since they have done an above average job on it. In our opinion it’s actually better than most other on-demand providers so if you haven’t checked it out yet make sure you take a quick look at it.